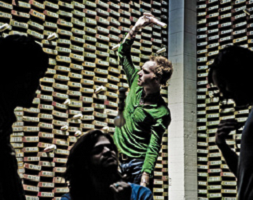 After 20 solid years of promoting music videos, many of our videos have skyrocketed to the top. Today, we present you with one of our most-watched videos on our Youtube channel. The Faints had some truth to share with “The Geeks Were Right”, but the video is also a colorful, kaleidoscopic good time; to date, it’s amassed over 855k views!

Sometimes when one door closes, another door opens, and such is the case for the members of The Faint. Todd Fink (vocals/keyboards/guitar), Joel Petersen (guitar, 1995-2008, bass, programming 1999-2008), and Clark Baechle (drums/percussion) would skateboard, but when Fink started having knee problems, they started focusing more on making music. They were originally known as Norman Bailer, and Conor Oberst was even a member when they first formed in 1995. Jacob Thiele joined the band on keyboards in late 1998.

We worked with The Faint twice: first to promote the video for “I Disappear” in September 2004, and then to promote the video for “The Geeks Were Right” in 2008. After releasing several records on Saddle Creek (including the notable Danse Macabre in 2001), in May 2008 they announced that they’d be releasing their fifth album on their own label, blank.wav. “The Geeks Were Right” was the first single from Fasciinatiion, and the video looks like the vision of the future from someone in the 1980s. The band members are mushed to mind-bending extremes: floating orange grids, kaleidoscopic swirls of light, warped rainbow figures, contorted images that feel mirrored into infinity. But even more arresting is setting the band members play in a black body-mask, or with a creepy, bearded old man superimposed over their face. The video is sure to be stuck in your mind, and the melody won’t get out of your head!

In the years since, Baechle and Fink have been playing shows as Depressed Buttons, remixing other artists and DJing. In 2010, The Faint performed the original song “Teach Me Teacher” on Yo Gabba Gabba!. Saddle Creek released a deluxe edition of Danse Macabre in 2012, and the band played the album in its entirety on a tour. After leaving the band in 2016, Thiele unfortunately passed away on February 13, 2020.  The Faint most recently released Egowerk in 2019 on Saddle Creek, with Graham Ulciny of Reptar on keyboards.