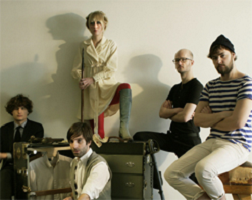 Here at HIP Video Promo, we’ve been working hard to promote music videos since the year 2000. It’s important to us to help younger and independent artists get the recognition they deserve, and it’s exciting to be on the ground floor with artists that become household names (and with over 3000 videos under our belts in 20 years, there are quite a few). Every Friday, we’ll be sharing a “Flashback Friday” video, where we get to reflect on one of our favorite videos from a few years ago.

Different genres evoke different feelings- electronic makes us want to dance while instrumental makes us want to chill out. Yet the Stockholm indie-pop band, Shout Out Louds, seemingly makes us want to groove, road trip, and reminisce on a past relationship at the same time. The preppy Swedish group connected with global audiences in the early 2000’s allowing them to tour the world. The five bandmates – Adam Olenius (vocals), Ted Malmros (bass), Carl von Arbin (guitars), Eric Edman (drums), and Bebban Stenborg (keyboard) – operate like a regular friend group who make music for fun. Some sessions were recorded in Olenius’ cabin fueled by packs of beer and jam sessions.

Musical boundaries don’t exist for Shout Out Louds; they incorporate everything from shoegazer to 80s synthpop, blurring honest palpable darkness with their frenetic energy. SOL have been through an immense personal and musical maturity period over the past two decades; they’ve worked with creatives like Björn Yttling and Phil Ek and took hiatuses in between major success periods to focus on solo band responsibilities and individual lives.

In 2007, we first partnered with Shout Out Louds to promote “Tonight I Have To Leave It” a journey following a young man’s odyssey across the ocean aboard a giant transport ship. Life aboard an oceangoing vessel is shown in a few bold strokes: exciting and mundane, dull and surprisingly beautiful. Below the deck, the members gather to sketch the skylines of the cities they’ve seen while delivering sweeping string arrangement, rattling percussion, and potent melodies.

A few months later, we worked on “Impossible.” In a dreamlike state, the music video is a simple and whimsical Scandinavian night at the amusement park. The endless rides and youthful arcade games keep them busy, and the bandmembers wander around as if they were dreaming. Time seems endless, and the rosy cheeks of Shout Out Louds occasionally wash over with impassivity and heartbreak.

Five years later, Shout Out Louds released “Walking In Your Footsteps,” which was one of their most ambitious efforts yet. The music video experiments with different elements like water, color, shadows, and filters. We’re taken through a kaleidoscope dream through dust and diamonds that creates an ambient tune. It makes us want to dance while heightening our senses at the same time!

Back in 2017, Shout Out Louds released the music video for “Porcelain,” a story about three friends with an unbreakable bond. A boy approaches one of the friends with a rose, but all goes downhill when the boy and his friend start to take advantage of the girl. The girl’s friends come to the rescue and shove the two abusers away to protect her. “Porcelain” is about a relationship that lacks stability but continues on despite the lack of foundation.