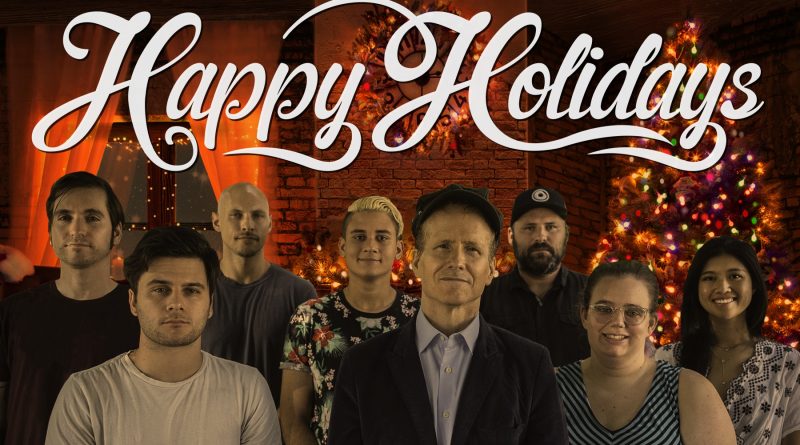 As the colder weather approaches and holiday decorations make their appearance in retail stores long before their actual dates, we are reminded that we are suiting up for yet another holiday season. Although the festivities can be a stressful period, we are all young at heart and cave into the cheery glow once we see the warm lights and eat the annual dinners. The holidays are enhanced by the music that accompanies it, both the traditional and the modern tunes. HIP has worked through 19 holiday seasons, meaning we have promoted a fair share of merry videos. Today we will be going through our top ten holiday videos.

In their 2014 video for “I’ll Be Home For Christmas,” Antennas Up clashes the cheery glow of the holidays with the dark side like the grinch. A young girl tries to get an early peek of the presents Santa brought her, but inside the boxes shines fangs and piercing eyes. She arms herself with kitchenware to fight off the monster and save the sanctity of Christmas for all.

“Bring Peace For Christmas”, released in 2018, is sheer seasonal joy, and its sly video converts toys and desktop objects into participants in the annual winter dance. The director, James T. Lundie, demonstrates as much flexibility as the artist does, utilizing stop-motion animation. Whether they’re whimsical or gravely serious, their immense creativity is always apparent.

“Christmas Cookie Blues” is not your average Christmas song full of holiday cheer. While the holiday season is full of emotion, it’s not always the emotions you want. Such is the story that unfolds in this 2018 video, a whimsical tale of lost love, told from the perspective of a forlorn young man trying to keep it together just long enough to get through a Christmas Cookie Exchange.

Another 2018 video, this is a bouncy, behind the scenes romp in the studio capturing the recording process of the single, with each and every note recorded by the duo. Their chemistry is apparent, and a loving gaze is shared between them while singing, making it clear that this song carries a little more weight to them than just a convenient cover song.

Jay uses his music video to bring attention to the millions of shelter pets currently waiting for their forever homes. The star from The Voice of China opens the door on Christmas to a group of furry, playful pals bursting in. Being the animal lover that he is, there’s just no way Will can resist the chance to snuggle up to each and every one of the curious canines. Released back in 2016, this is a heartwarming clip we love watching every year!

Described as a “rock and roll assassin”, back in 2013 Brian Kroll shared the “Flight Deck For Christmas” video. This one combines puppetry and digital animation to create a slick presentation, but this is more madhouse than funhouse. Let’s just say this one will give you a view of the other side of the holiday season…

In this 2006 clip, the trio and their dancing fans are contained inside a child’s snow globe. As the flakes fall around their faces, images of the city they’re celebrating are projected on a green screen behind them. As their voices raise in unison to sing the praises of the season, their energy and enthusiasm give Christmas a specific type of glimmer.

This video features Dick & Jane playfully dancing and prancing around the mic as they detail their plans to spend the day singing door to door. We promoted this in 2017 and it’s the type of video you’ll want to watch – and sing along with! – year after year. The white backdrop and snowfall, along with the stars’ winter garb, set a scene that will inspire anyone to get outside and appreciate the blessings of caroling. The delightful snowy footage shown in the music video was shot at Universal Studios in Hollywood, California.

As the masters of silliness, Patent Pending sing about a woman who uses the cover of the holiday season as a pretext for sleeping around. In this 2008 seasonal video, we watch the heroine at a Christmas party, flirting with all the guys and a lecherous Santa, and drinking liberally from the punchbowl as the young woman jingles all the way to the bedsheets. During this all, the band continues their cheerful personality and jam out inside what appears to be a gigantic present.

On a set decked out with holiday decorations in red and green, the singer waits patiently for the return of her beau – and she’s not above occasional (and endearing) acts of impatience! We watch her wrap presents, bake cookies, sip from an oversized mug, trim the tree, and even toss a candy cane at the camera. She’s always pretty as a Christmas card, but she’s never quite ready to celebrate until the moment her man comes home.  This one’s a brand new 2019 music video, but it’s a story as old as time.