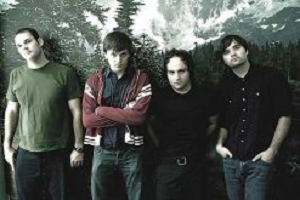 On November 22, 2017, the day before Thanksgiving, Death Cab For Cutie celebrated the 20th anniversary of their first live show. Taking place on Saturday, November 22, 1997, it was a “low-key and invite-only” event, and fans were instructed to “call Ben to verify time”. Check out this flyer created for that first show, which the band recently shared on Twitter.

Today marks the 20th anniversary of the first Death Cab for Cutie show. To commemorate the occasion, Ben unearthed the audio recording of the first show. Available on @Bandcamp w/ all of the band’s proceeds benefiting Seattle’s @aurora_commons.

Originally formed as a solo project by vocalist / guitarist Ben Gibbard, Death Cab For Cutie, are one of alternative  and indie rock’s most cherished artists. After releasing the demo album You Can Play These Songs with Chords, Gibbard signed to Barsuk Records and expanded the project in to a band. Their first three albums- Something About Airplanes (1998), We Have the Facts and We’re Voting Yes (2000), and The Photo Album (2001) saw moderate success, but it wasn’t till their fourth album, Transatlanticism (2003) that they saw critical and commercial success on the mainstream level. After Transatlanticism was released on October 7, 2003, it stayed at number one on the CMJ charts from late October till early November. 2003 was a banner year for Death Cab For Cutie and it was an honor to partner with them to close out the year with the video for “The New Year.” Shot by director Jay Martin and cinematographer Max Goldman, “The New Year” is a visually elegant and meticulously crafted story of various individuals ringing in the new year. First we see the “beautiful people” gathered at a swanky night spot, but then the perspective shifts to show how the other half- those working in the service industry, for whom this is just another night on the job- lives. The night concludes in a diner that’s not unlike Edward Hopper’s painting Nighthawks. “The New Year” is somber and introspective, while also being evocative and poetic in its delivery. Watch the video for yourself below!

After “The New Year”, we went on to partner with Death Cab For Cutie for three more videos: “The Sound Of Settling”, “Title And Registration”, and “Soul Meets Body.” Since 2003, the band have released four more albums: Plans (2005), Narrow Stairs (2008), Codes and Keys (2011), and most recently Kintsugi (2015). They’ve been nominated for eight Grammy Awards and four MTV Video Music Awards; in 2008 their video for “I Will Possess Your Heart” won the VMA for Best Editing. Transatlanticism and Narrow Stairs have been certified Gold by the RIAA and Plans is certified as Platinum. Death Cab For Cutie’s live shows continue to win the hearts of fans new and old, and in addition to festival performances they’ve headlined tours around the world. In fact, in 2015 they performed at New York City’s Madison Square Garden for the first time! With eight albums under their belts already, Death Cab For Cutie have an extensive discography, but they’re not done yet. Per an Instagram post in mid November, the band are expected to released their ninth studio album in 2018.

We’ve been fans of Death Cab For Cutie since day one, and we’re eager to see what else they have in store for the future! We can’t wait to see who becomes the next break-out artist. Do you think your video has what it takes to be the next break-out smash hit? Get in touch with Andy Gesner and the rest of the HIP Video Promo team by giving us a call at (732)-613-1779 or emailing us at info@HIPVideoPromo.com.