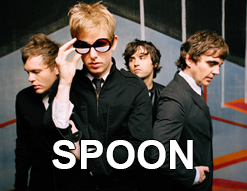 Here at HIP Video Promo, we’ve been working hard to promote music videos since the year 2000. It’s important to help younger and independent artists get the recognition they deserve, and it’s exciting to be on the ground floor with artists that become household names (with over 3400 videos under our belts in 20 years, there are quite a few). Every Friday, we’ll share a “Flashback Friday” video, where we will reflect on one of our favorite videos from a few years ago

Although music genres are evolving and new bands are taking over old ones, some cannot be replaced. These types of bands have a multi-generational appeal, bands that, when played out of the blue, will have everyone on their feet singing along, bands like Spoon. The Austin natives were pioneers in refining that early 2000’s indie-rock sound. They moved past their post-punk phase in the fading grunge of the 90s and incorporated almost every element (rigorous punk, twisting rock, atmospheric concepts) to create masterpieces.

Spoon never had an “up and coming” period, the five piece’s garage-recorded debut album, Telephono, reached #35 on Billboard’s Indie Albums Chart. As Spoon’s sound changed, so did their labels; they previously worked with Matador Records and Elektra Records. Now, they are currently signed to Merge Records and, due to their success, have been a fixture on soundtracks, television programs, and late-night talk shows. Recently, they’ve written books, partnered with Fender, and even worked with our very own Nicole Atkins!

We are fortunate to say that the first-ever Spoon video we promoted is one of their most famous, “The Underdog”. The music video was filmed in their hometown and recreated the song as a live recording session. The camera finds musicians behind every wall and corner, waiting for their turn to play. While the music flows, each musician differentiates; some look bored out of their mind while others are dressed as mariachis.

The next video, “Don’t You Evah”, was an all-time favorite- it found its way into videogames and unofficial fan remakes. The clip showcases all things tour; it catches Spoon onstage, backstage, in the band van, getting to a gig, and communicating with packed houses of listeners. The camera captures Spoon candidly in the green room and city streets, showing viewers their camaraderie and synergy as a group.

Later, “Written In Reverse” was released. The camera is from the perspective of the audience, but it’s revealed that there is no audience; only mirrors reflect the band’s hard-hitting performance. The mirrors play tricks on the viewers, and sometimes we can’t tell which is real and which is the reflection; all we know is that “Written in Reverse” was their next pop classic.

Spoon hides in the darkness in their most recent music video, “I Ain’t The One.” The chilly track outlines the band in a grate of shadows as the members pour their hearts out into the song. Escalators and exit signs are the only interruptions in the clip, but they’re packed with a lot of meaning; Spoon is literally and metaphorically leaving someone behind. The emptiness of the departure allows us to take in the weight of the lyrics fully.