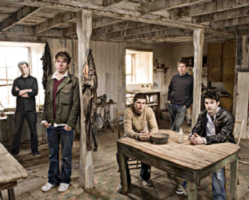 Here at HIP Video Promo, we’ve been working hard to promote music videos since the year 2000. It’s important to us to help younger and independent artists get the recognition they deserve, and it’s exciting to be on the ground floor with artists that become household names (and with over 4300 videos under our belts in 22 years, there are quite a few). Every Friday, we’ll be sharing a “Flashback Friday” video, where we get to reflect on one of our favorite videos from a few years ago.

The Early November formed in Hammonton, NJ by singer and guitarist Arthur “Ace” Enders, bassist Sergio Anello, drummer Jeff Kummer, and guitarist Jim Sacco. In a bold move, they submitted a demo to only one record label- Drive-Thru Records- who signed the band. They released their debut EP, For All of This, on Drive-Thru in 2002, and the following year – after nationwide touring – released their debut full-length album, The Room’s Too Cold.

But before we worked with The Early November, in February 2005, we teamed up with Ace Enders to promote a clip from his solo project, I Can Make A Mess Like Nobody’s Business. “The Best Happiness Money Can Buy” is acoustic, but this is definitely a rock song: drummer (and co-producer) Chris Badami keeps things lively with the beat. Directed by Pax Franchot, the video finds the band on an idyllic country ranch and alternately playing a friendly game of poker. It’s hard not to be won over.

That fall, following a re-release of The Room’s Too Cold, we were able to work with The Early November to promote their video for “The Mountain Range In My Living Room”, a fan favorite from their live shows. Here, the band performs in front of a large home set on spacious grounds, while a young woman meanders within.

In the clip, the band performs in front of a large, almost stately suburban home set on spacious grounds. The performance footage is suitably energetic, but its main function here is to serve as the framework for the dramatic story line. This consists of a young woman, in a simple yet still elegant back dress, meandering through the interior of the house. In contrast to the bright and colorful exterior shots of the band, she’s seen mainly in shades of grey as she moves down a staircase or gazes out a window, backlit by the setting sun. When she makes her way into the living room, the framed portraits on the wall and on the mantle begin to speak to her, but in the end, they don’t have many meaningful things to say.

“Something That Produces Results” was another fan favorite included on the The Room’s Too Cold re-release. Once again, we see the band performing, but there’s a strange, flashing energy here. First, the audience members appear oddly flat; then, the whole club gradually becomes a distorted checkerboard.

The following summer, The Early November released their sophomore triple-LP The Mother, the Mechanic, and the Path. Lead single “Hair” is gleeful yet bittersweet, and for its video, the band paired with Drive Thru’s in-house video director Scott Culver. It’s set in a typical 1950s suburban neighborhood… but is this picture-perfect town for real, or just a façade?

But in 2007, The Early November announced an indefinite hiatus. Luckily for fans, it didn’t last all too long, and the band reunited in the summer of 2011. They signed to Rise Records and released a new album, In Currents, in 2012, which was followed by Imbue in 2015. Though there were some shifts in their lineup in the early years, since 2006, The Early November has consisted of Ace Enders; Sergio Annello; Jeff Kummer; Joseph Marro on rhythm guitar, keyboard, piano, and programming; and “Ultra” Bill Lugg on lead guitar.

The Early November have continued to tour and play festivals since their reunion. Most recently, they released their fifth studio album, Lilac, this September. They’re on tour right now with Have Mercy and OWEL, head to www.TheEarlyNovemberMusic.net to see if they’ll be in your city!

The Early November continue to create stellar music videos; check out “Ave Maria” from the new album below.