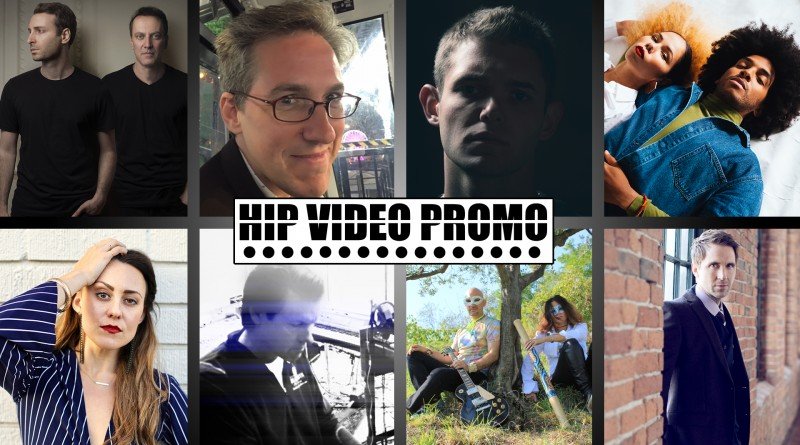 It’s been another busy week here at HIP HQ, and with a whopping eight videos to share, we’re pretty confident October should be renamed “ROCK-tober”! Of course, it’s not just rock – we’ve got rap, electro-pop, and pop-soul. Read on to see the latest HIP Picks – Weekly Client Roundup to see what we’ve got in store!

Santee Street runs through one of the great commercial neighborhoods in the Western Hemisphere: Los Angeles’s Fashion District. For their new video for “Speak Life”, fearless pop-soul innovators HEЯITAGE have taken to the Santee Alley. Singer-guitarist Hannah Eggen and saxophonist and vocalist Gianluca Gibbons have deep roots in street fashion and are right at home in this melting pot area: native Bermudians, they blend new wave, hip-hop, reggae and Carribbean music, electropop, blues, Afrobeat, and punk, and “Speak Life” is an example of the kind of heat they can generate.

Lyric videos are much more than plain words on a screen, and if you’re ever in doubt, check out MaWayy’s lyric video for “Blame”. It’s hypnotic and exciting, and the long-distance electronic duo (Brian Wayy is in Los Angeles, while Masoud Fuladi is in Iran) waste no time in getting you moving. There’s real heartbreak and longing in “Blame”, and animated illustrations of the duo capture their intensity.

Known in the New Jersey scene as a music journalist as well as a rocker, Tris McCall’s musical vocabulary runs deep. His latest single “Conspiracy Theory” is paired with an essay that shows he’s given his subject matter some obsessive thought. The pop-infused indie rock track is paired with a video done by award-winning filmmaker George Pasles, where Tris channels a peculiar form of American madness.

22-year-old Michigan native Isaac Castor has already built an impressive resume: he’s opened for Mac Miller, he’s been praised by XXL, and he’s appeared at the Vans Warped Tour. For his new track “Da Bounce” he’s teamed with LA producer L05. The video pairs Castor with a cocky junior version of himself, and the two dance together in a boxing ring – but it’s all in good fun.

Early autumn is the best time of the year to be in New York City, and for his “Raincoats” clip, Scott Gray has returned to the Big Apple. Though he makes his home in Nashville, his jazz-pop songs feel right at home here, pulling influence from musical theater and film soundtracks. “Raincoats” is a timeless tale of flirtation, as Gray searches for love and adventure on a beautiful day in the city.

Melanie Taylor is a Los Angeles based singer-songwriter whose time has come to leap off the page into the limelight. Following up on her 2016 self-titled album, her new single “Adderall” shows her coming to terms with a need for release. The alt/electro-pop track is paired with a video that shows her grace the streets of Hollywood and alternately screaming to God, begging for answers.

While many musicians will go all-in chasing their dreams at a young age only to give up when real life gets in the way, Stephen Winston set his musical pursuits aside to work in the corporate and communications world. Now retired from the corporate world, he’s able to spend all of his time making music. That is, when he’s not with his family. His latest video, “Maybe It’s For James”, is a dedication to his grandson James, who was born premature and spent months in neo-natal ICU care. The song came to be when, one night while in Hawaii, he heard laughter from a party, which felt like a sign the tide was about to change; now, James is a healthy five-year-old boy.

Driven by lead singer Lucas Ward and his wife Elisa Fantini, The Silver Snails are a band with a goal (to create the world’s finest pop rock) and a mission (to open human hearts through sound, light, and word) as lofty as they come. “Ave Maria a Zio Virgilio” was written by Lucas as a requiem for Elisa’s Uncle Virgilio, a devout follower of Mary. Shot on location in Romagna, Italy, the video features tango dancing, peacocks, flowers, accordions, and Bollywood-inspired group choreograph with Lucas dressed as the Hindu deity Krishna. It’s a departure from the “space-pop” milieu of “Dancing with the Stars”, but equally as intriguing.