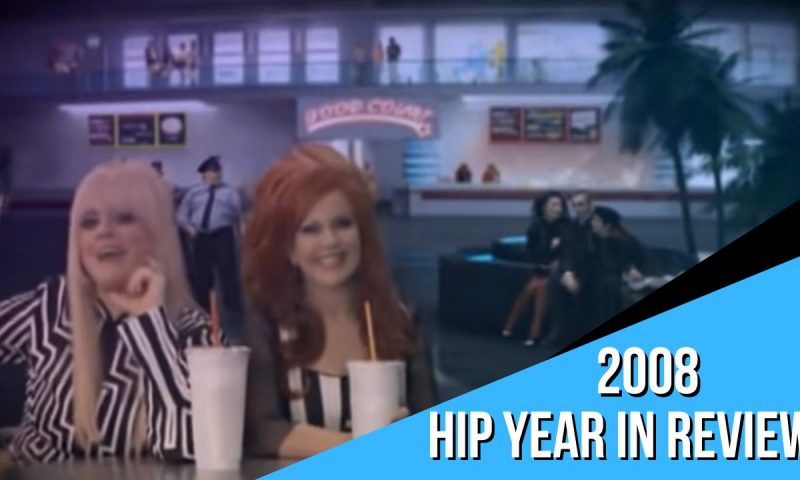 HIP Video Promo has been privileged to work with some of the best artists on the planet for over two decades. While looking back on 2008 is not easy for many, considering the impact of the nation’s steepest economic decline since World War II, we try to focus more on the positives here. Amy Winehouse won five Grammys. Trending ringtones swept the world. High School Musical 3 was released, completing the timeless, iconic trilogy. Plus, HIP Video Promo teamed up with yet another batch of talented creatives for these 2008 music videos.

The B-52s – “Funplex” – 744,234 views – We were overjoyed to partner with superior pop duo The B-52s to help popularize the title track of their seventh studio album, “Funplex.” After 16 years without a new album, they came to us to get their new wave ’80s groove back with this single. The video is set in a virtual Funplex mall. As the singers and musicians mount the escalator, elevator music plays the chorus soon to be stuck in your head after hearing the rest of the song. It is all about crazed shoppers and the frivolous, extraneous spending on fashion, food, gadgets, and whatever else sticks to consumers’ fingertips. Malls are staple locations for entertainment and leisure, so putting this highly amusing musical combo in one only raises the bar higher. They also comment on the different people and perspectives in the mall, such as sexy young people, annoyed old people, moody food court employees, and wary security guards. Following our promotional campaign, “Funplex” peaked on the charts at 14, and its respective album made it to 11.

She & Him – “Why Do You Let Me Stay Here?” – 2,498,709 views – “She” is Zooey Deschanel, and “Him” is M. Ward. Together, they’re an unstoppable acting and singing-songwriting pair. After meeting on set for The Go-Getter and recording “When I Get To The Border,” both knew they could not let their naturally sweet blending vocals be a one-and-done act. “Why Do You Let Me Stay Here?” was She & Him’s debut. The pop, country, and folk sound they exuded caused indie music lovers to erupt with excitement for the rest of their Volume One album from there. The lyrics are innocently flirtatious, but the visual has exaggeratedly animated effects that thicken the plot line on the surface. She & Him have continued making and releasing music sporadically over the years. As of 2022, they produced another album, Melt Away: A Tribute to Brian Wilson, and are featured in the soundtrack for the Apple TV+ original series Snoopy Presents: Lucy’s School with their latest single, “Back to School.”

Mötley Crüe – “Mutherfucker Of The Year” – 1,158,209 views – Before the words begin, the instrumental gets you hooked and pumped up for rock and roll. The repeated guitar pulse heightens the internal excitement and then comes the electrifying, hair-raising guitar and drum lines that battle back and forth until the vocals. As the title suggests, Mötley Crüe sings about the qualities that make him the “Mutherfucker Of The Year,” with comparisons to a thorn, snake, black cat, and hand grenade. The band’s thrilling performance in the music video is pulled straight from their summer 2008 tour, Crüe Fest. Any fan can attest to the fact that they deliver when it comes to live shows, and the bright lights and blazing flames match Mötley Crüe’s fiery stage presence. Having this music video to take in all their past glory once more is a true treasure.

Frightened Rabbit – “I Feel Better” – 272,148 views – Frightened Rabbit has been a touring band since they came to HIP. In addition to their own headlining shows, this indie pop-rock group toured with other members of the HIP family, like Pinback and Death Cab for Cutie. At the time of the “I Feel Better” music video, they were already an international underground favorite. The video brings a story drawn in a sketchbook to life, and – as with all visual art – there is a bigger message than what first meets the eye. As frontman Scott Hutchison tells us lyrically, he is facing oscillating emotions after leaving his ex-girlfriend and seeing her already moved on to another guy. He feels better, worse, and then even better, and the song is a declaration that it will be the last one he sings that he wrote about her. The drawings represent uncertainty about which direction to go from his current position. When indecisiveness reaches a breaking point for the main character, he connects himself to a machine showing him all the potential futures depending on which direction he goes – if it were only that easy!

K’Naan – “Strugglin'” – 856,918 views – If you think your struggle is real, K’Naan’s life experiences and professional gains exemplify how all challenges are surmountable regardless of their weight and scope. He is a Somali refugee who fled his native country at a time of colossal violence and political disarray, but from his new home in Canada, he wrote and produced “Strugglin'” and other well-received hits addressing Africa’s issues and pleading for resolution. In this single, he recognizes the struggle he has overcome and those that linger while also comprehensively detecting those struggling around him in low-income housing in his urban neighborhood. He is grateful for the past because it pushed him to reach his recording artist status, and he expresses how he is glad to still be in communication with his brothers. To date, he has earned many awards and nominations, and ultimately, K’naan shows a shimmering light of hope and upswing at the end of every dark tunnel for anyone and everyone.

The Dirty Heads – “Stand Tall” – 12,071,431 views – Despite the opening verse of “Stand Tall” making it seem like a typical song about getting over a breakup, it quickly turns around to be an uplifting anthem about staying strong because things can only get better. Unlike the many musical groups who “have a unique sound,” The Dirty Heads demonstrate what that truly means by mixing pop, folk, and — wait for it — reggae in this summer-charged single. Speaking of summer, “Stand Tall” actually made it into the 2007 movie Surf’s Up by Sony Pictures Animation before this music video premiered. Just as the animated character is fixing up his surfboard in “Surf’s Up,” The Dirty Heads fix up their rowboat in the 2008 visual. The California sun and atmosphere beautify each video clip, and the positive vibes and hooky choruses we referenced back then are equally radiant and compelling to listen to and watch in 2022.

Drowning Pool – “37 Stitches” – 5,494,468 views – The music video for Drowning Pool’s “37 Stitches” lets the viewing audience into the band’s life as they prepare to leave for another tour. Packing their bags, saying goodbye to their folks in Dallas, Texas, and loading everything onto the bus, Drowning Pool gives a behind-the-scenes look at how and why they do what they do for their adoring fans. Their striking rock vocals and performance resembling one of their live shows cannot be missed in this single, as it captures everything that makes Drowning Pool the first-rate group they continue to be today. As of their 2022 tour, they played two songs expected to be on their next album, Strike a Nerve, which has been announced for a September 30 release. It’s almost here, so check it out along with the rest of the outstanding works of musical art from the talents featured in this HIP Year in Review 2008 post!