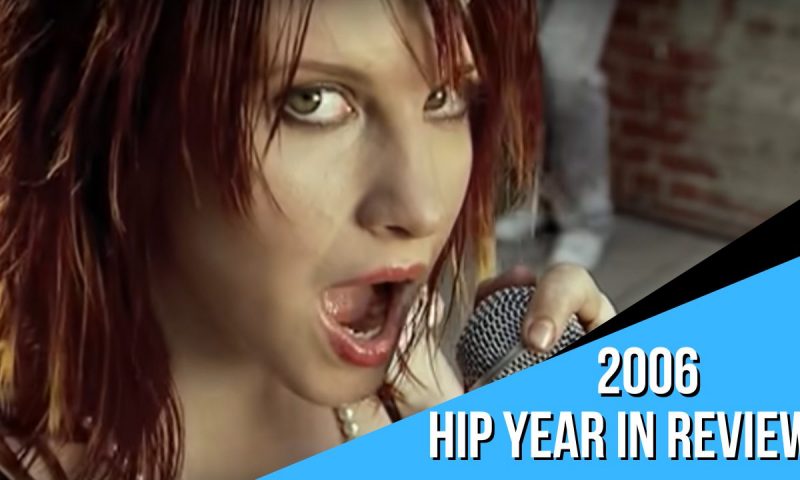 Friends and family of the HIP team members frequently ask, “Has your company promoted any big names?”. It’s usually the second question that comes out of their mouths following “Where do you work?” because the answer, “a music video promotion company,” has an interesting ring to it. In short, the answer is yes – we’ve promoted many big names!

But the HIP Year in Review series was made for the long answer. Year after year, HIP has teamed up with a plethora of sensationally talented creatives. In 2006, when Twitter launched, Blu-Ray discs were released, and Hannah Montana premiered on Disney Channel, these are just a portion of the clients and music videos we advocated for:

Paramore – “Emergency”  – 48,643,363 views  – Boldly starting this list are Hayley Williams and the other members of the Grammy-winning band Paramore. Founded in 2004 and debuting with the All We Know Is Falling album in 2005, they swiftly took to the tops of national and international charts. Fans of today and yesterday gush about how Paramore has such a surplus of energy during live performances that it emits onto everyone in the audience, making for an unforgettable experience. The 2006 hit, “Emergency,” contains Williams’ outcry that she will not walk away in love when things get tough because she has watched falling outs that never should have happened countless times before. She is determined not to let another tragedy like those happen again, as voiced in every highly expressive lyric in this memorable song and visual.

Pop Evil – “Somebody Like You” – 950,631 views – No one can resist a good love story, but Pop Evil’s “Somebody Like You” video throws in some curveball plot points that change everything in the single’s seemingly-apparent storyline. Lead singer Leigh Kakaty recounts all the good times in his romance devastatingly taken away from him in one irreversible instant and how difficult it is to move forward in a world without that special person. Viewers relive this flashback with the help of actors Britt Koth and Rossi Morreale. A car accident relinquishes Morreale’s opportunity to propose to Koth at their intended destination, and “Somebody Like You” is the resulting product of his grieving. His undying admiration is represented in the ghost of Koth latching on tightly in Morreale’s mind. Furthermore, the story continues to thicken all through the end, so be sure to watch and listen to take it all in.

Halestorm – “Takes My Life” – 76,025 views – In “Takes My Life,” Halestorm brings back the good old days of unedited live music releases. Now, most of the songs we hear have had certain kinds of technological tuning, which was often already the case in 2006. However, Lzzy Hale and the band’s striking talents need no polishing to be appreciated. The sound and performance of this song are about as real as it gets for audiences who want raw, unrefined artistry on show. Hale’s distinguished rock screaming brims with force and passion, and Halestorm went on to win Grammys for Best Hard Rock/Metal Performance in 2013 and Best Rock Performance in 2019. They were the first female-fronted group to be nominated, so winning — not just once but twice — is a hefty accomplishment. It’s obvious why in “Takes My Life,” and having released multiple other singles, EPs, and albums, Halestorm’s upcoming tour dates in 2022 and 2023 are worth checking out.

Buzzcocks – “Wish I Never Loved You” – 4,921 views – When facing adversity in relationships, it can feel like nothing you say or do is right or good enough. For the Buzzcocks, this cooped-up frustration has them wishing they never loved that significant other in the first place. Their fiery lyrics in “Wish I Never Loved You” sum this up perfectly, expounding upon the irritating circumstances. The emotion that results from the lying, blaming, excuses, and discouragement comes through as soon as the first verse: “It’s crystal clear now that we’re going nowhere, and that once was a dream has become this nightmare.” The driving instrumental also pushes this aggravated mood further to the fore throughout the song. Considering the Buzzcocks are such rooted players in the punk genre, it was our pleasure having worked with them to promote this music video in 2006.

Korn – “Coming Undone” – 115,361,368 views – Press play on Korn’s “Coming Undone” music video, and the band promptly seizes control over your mind and body. Following the guitar intro, the drums create a headbanger’s playground. By the looks of the four band members, this song also has the same dominating effect on them. While physical control seems lost for all, Jonathan Davis’ deep and heavy words describe his psychological state of almost losing control of himself as he feels he is falling apart. He creatively portrays this internal fight with poetic imagery that will connect with anyone who has experienced such angst or depression. Visually, the world around the performing rockers goes to ruins as well, and it does not stop until they are shredded to pieces by the end.

Fatboy Slim – “That Old Pair Of Jeans” – 226,881 views – Viewers will be mesmerized watching comedian Chris Bliss’ musicality juggling along to Fatboy Slim’s “That Old Pair Of Jeans.” Each ball Bliss throws and each trick he executes aligns organically with Fatboy Slim’s words and the song’s beats. The singer never appears on camera, yet his melodic rapping, backed by the electronic backing track, reaches all listeners without a hitch. Unraveling his past relationship that did not pan out, he remains optimistic that maybe they can patch up their bond if and when fate decides. Only time will tell, but more recently, his single “Speed Trials on Acid” is being met with great interest and has been re-released with a few remixes helping to keep it fresh and heard by the masses.

Ministry – “Lies Lies Lies” – 455,351 views – Fans continuously flock to Ministry for their forthrightly political and confrontational song lyrics, and “Lies Lies Lies” lives up to this popular crowd appeal. The song puts a huge target on the federal government, opening with an announcement that the band will overthrow the nation’s leaders. Similar announcements are sprinkled throughout, with the intent to make audiences more aware and concerned over the disposition of the United States. There is outlined speculation about hidden details from 9/11 and calls for Americans not to be fooled by the government’s deceit and misinformation spreading. The aggressive rock vocals and extremely intense instrumental carry Ministry’s pursuit to uncover the truth and let everyone see the betrayal for themselves. With all this drawn from listening to “Lies Lies Lies” on its own, the accompanying music video also matches this single’s tinder.

Dr. Octagon – “Aliens” – 2,480 views – Keith Thornton went by Kool Keith for years, garnering an adoring fan base and notable success as part of Ultramagnetic MCs, but beginning his solo career as Dr. Octagon truly defined him as an exceptional hip-hop artist surfacing in the ’90s. His debut album, Dr. Octagonecologyst, was commended by critics and collected many positive reviews from avid hip-hop lovers. He then went off the grid for a decade but made a strong comeback with The Return of Dr. Octagon in 2006, which brings us to our partnership. “Aliens” was one of 14 hits that rolled out with Dr. Octagon’s resurgence, and we promoted it along with “Trees” later in the same year. AllMusic said the album “doesn’t always make a lot of sense, but that’s the beauty of it. It’s a kind of concept album that concentrates more on the actual overall sound than the concepts. Its elements are all on the very edge of control, which is both exhilarating and terrifying at the same time.” We could not agree more, and we are happy to be able to say we were part of Dr. Octagon’s epic musical rebound.

Motion Man – “One Time For Your Mind” – 7,315 views – Going out of 2006 HIP Year in Review with a bang, Motion Man’s “One Time For Your Mind” fits the bill. The song’s respective album got people’s attention with its outstanding collaborations, such as with the aforementioned Kool Keith and DJ Q-Bert, DJ Vadim, Mistah Fab, Too Short, and Gift Of Gab. Specifically for “One Time For Your Mind,” he teams up with KutMasta Kurt and spits fire bars with various complex rhythm changes that let his voice dance around the emphasized downbeats of the backing track. To this day, the accents from the horn lines behind both artists’ raps take us back to that supreme hip-hop music style from that era.