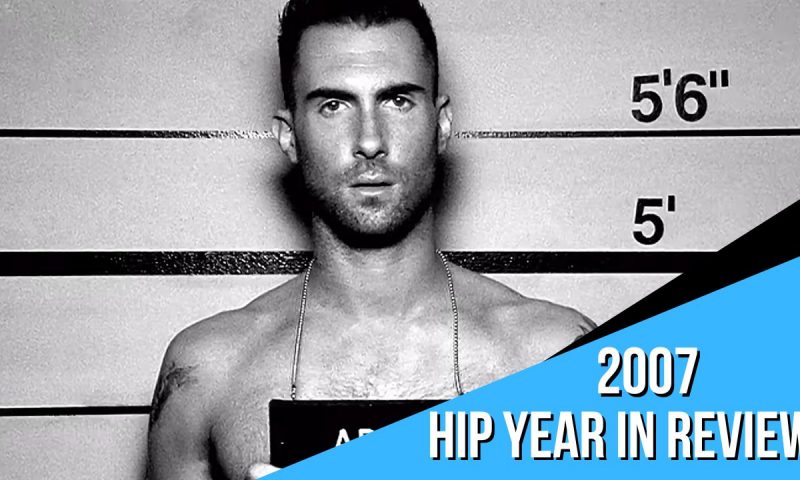 Picture this: It’s 2007. Bob Barker has hosted his final episode of The Price is Right, Apple has released the very first iPhone, and Keyboard Cat rules the internet. Time has flown by since, as it seems like just yesterday HIP Video Promo was fighting the good fight for these extraordinary 2007 artists’ music videos:

Maroon 5 – “Wake Up Call” – 71,066,193 views –  No one can call themselves a 2000s music lover if they weren’t obsessed with this song. Lead singer Adam Levine finds his girlfriend guilty of cheating. He calls her out for going behind his back to give her love and care to someone else, and when he catches them in the act, he takes matters into his own hands. The video shows the whole affair from start to finish, presented as a trailer for what could have been worthy of a full-length film. The raving YouTube comments under “Wake Up Call” also stand the test of time, with Maroon 5 fans continuing to replay this legendary 2007 hit over and over again, even as of 2022.

Sia – “Pictures“ – 1,616,013 views – Sia has become an international pop sensation. She had proved herself to Australian and European audiences way before America was finally introduced to her in 2006. A year later, HIP had the honor of promoting “Pictures,” her only single not yet released or heard as part of the Lady Croissant live album in 2007. The visual exhibits the main actor’s fond memories of his bygone relationship with Sia’s character. Her lyrics tell him to let her go and move on, revealing certain ways he caused the distance that eventually caused them to fall apart. His longing for her is on clear display with his fantasies of the pictures of her on his wall. In 2014, Sia’s Forms of Fear made it to the top spot on U.S. charts, which included the MTV VMA Best Choreography winner “Chandelier” featuring Dance Moms star Maddie Ziegler for the first of many subsequent projects. Sia also threw her hat into script writing and movie directing with Music in 2021, based on a story she also wrote in 2007. Her future in music and entertainment continues to shine brightly today.

Spoon – “The Underdog” – 1,993,413 views – Indie rock enthusiasts are always ready to be Spoon-fed! There are two pronounced interpretations for “The Underdog,” and both could be correct simultaneously or independently. On the one hand, it’s advice for listeners never to discredit and brush off the little guys because anything is possible, and the underdog can pass you by if not taken seriously. On the other, it might as well have been the band’s warning that anyone questioning their capacity for greatness during their rise to fame will live to regret it. A decade and a half later, they could make any early naysayers eat their words with their current status and latest Lucifer on the Sofa record. Now, “The Underdog” is still ranking up views – it’s closer and closer to breaking 2 million on HIP’s YouTube channel. One detail in the video for “The Underdog” that’s easy to overlook is Spoon’s lead singer is not the focus; it’s the backing instrumentalists and creative players who might otherwise be overlooked. The track’s score gives each instrument time in the spotlight, from the bass and drums to the horns and tambourine.

Five Finger Death Punch – “The Bleeding” – 27,777,394 views – When HIP worked with Five Finger Death Punch in 2007 for “The Bleeding,” the present-day powerhouse metal band was building anticipation for their debut album, The Way of the Fist. This single did the trick, with its raw anger and pain bared in Ivan Moody’s storytelling and performance. The dueling electric guitars open the first minute of the song with intense shredding and enticing harmonies. Moody’s heavy, evocative words in the verses disclose more of his intimate tale of love and loss that particularly hits home for him. It’s all delivered beautifully with exquisite narrative-style clips directed by Bradley Scott mixed into the band’s captivating stage act. Five Finger Death Punch achieved rapid success with this single and album, and they have not forgotten where they got their start. They announced their plans to re-record The Way Of The Fist in celebration of its 15th anniversary in 2022. Revisiting its magnificence with years of experience and access to proper production, they seek to enhance its sound, but can the original actually be beat?

“Weird Al” Yankovic – “White & Nerdy” – 159,870,898 views – Unlike any of the more “serious” artists covered in the HIP Year in Review series thus far, “Weird Al” Yankovic is best known for his parodic music videos of some of the prominent popular culture idols: Nirvana, MC Hammer, Coolio, Queen, Bruno Mars, and others. “White & Nerdy” imitates the charting hit “Ridin'” by Chamillionaire. Yankovic plays with Chamillionaire’s cool, rich guy persona represented in the song and transforms it into a geeky, quirky oddball who takes great pride in his nerdy tendencies. Do not let the parody material fool you; Yankovic has a natural flow to his rapping and undeniable talent as a creative artist that can be neglected merely for his means of expression. In November, a “Weird Al” biopic starring Daniel Radcliffe will be released on the Roku channel. If you’re interested in learning more about this truly unique entertainer, add the film to your must-watch list.

The Chemical Brothers – “The Salmon Dance” – 28,039,766 views – Not every appreciable single needs a profound purpose or calculated plot to stimulate listeners. Sometimes, a catchy backing track and some how-to dance lyrics are plenty to hook them in. “The Salmon Dance” by The Chemical Brothers exists because of these foundational characteristics. The digitized beats and accents from the electronic flute trills create a natural groove, but since people in this day and age also like listening with their eyes, The Chemical Brothers come through with quite the visual. With the help of Fatlip the Fish and Sammy the Salmon, along with a beatboxing pufferfish and the fellow synchronized dancing aquatic creatures, the video instructs the protagonist looking into the fish tank and its video viewers how to dance “like a salmon floating upstream.” Scattered in between these instructions are general facts about salmon, so you may just learn a thing or two from The Chemical Brothers here.

Porcupine Tree – “Fear of a Blank Planet” – 37,724 views – Music and culture have a reciprocal relationship; music shapes culture, and culture shapes music. They end up being reflections of one another. Porcupine Tree’s “Fear of a Blank Planet” embodies this completely. The music video focuses on teens living their everyday lives, but their normal is concerning as they’re brainwashed by television media, video games, and — most alarmingly — prescription medication. It was happening in 2007, and it is still relevant in 2022. Personalities and detectable senses of humanity are wiped away by the drugs, and they are kept under the control of all authorities in their lives to the point that their lives are no longer fully their own. The sad but true reality prevails through the video aesthetic, and Porcupine Tree’s energy and investment in the message can be heard without extra effort to get it.

Charlotte Gainsbourg – “The Operation” – 699,972 views – The chemistry between Charlotte Gainsbourg and her shirtless lover in the video makes for an uncomplicated video concept that perfectly matches her imagery-infused songwriting. Her eyes never meet the camera lens, but her performance keeps audiences hanging onto each of the lyrics she or the young man mouths. This should come as no surprise since she doubles as a talented actress. The two actors’ plain black background and transparency give the visual a dreamlike charm. Vocally, Gainsbourg has a gentle sexiness about her, which works with the mysteriousness of the song overall. It is a literal piece of musical and cinematic art that earns every bit of praise it receives.

Chromeo – “Tenderoni” – 585,080 views – Contrary to how it might sound, “Tenderoni” is not a food. While the van being driven around in the music video is for Tenderoni Pizza, that is not the point. In the ’80s, it was a term of endearment referring to a young love interest, and with this 2007 Chromeo single, Dave 1 and P-Thugg attempt to renew the expression for modern synthpop-R&B listeners. The duo performs the song to her as murals of Chromeo and an attractive woman come to life on both sides of the pizza delivery van. By the end, the painted tenderoni figure answers the door for her pizza delivery in the flesh, pulling driver P-Thugg inside as Dave 1 is left on the side of the truck. Fundamentally, the sultry affection is impossible to miss lyrically and visually in this retro song and video.

New Found Glory – “Kiss Me” – 8,809,176 views – As the band name suggests, New Found Glory loves reinventing popular radio songs, turning them into electrifying rock hits that beam with genre-changing brilliance. Their ongoing From The Screen To The Stereo album series releases have impressed fans with these covers time and time again. Included in the second round of the trilogy to date is The New Found Glory remake of Sixpence None The Richer’s award-winning “Kiss Me.” The once sweet acoustic with light, soft singing gets reincarnated as a rip-roaring, electric guitar-laden version that makes it hard to pick a favorite between the two. The visual captures the band’s lively performance and couples’ passionate love amidst some expected wild fun, as any good rock act needs.

Grizzly Bear – “Two Weeks” – 15,192,574 views – With choir-like vocals and influence from folk and pop genres, the Grizzly Bear brought us “Two Weeks.” The song’s meaning is not in your face, and audiences still debate it. It can be interpreted as explaining a dysfunctional relationship and asking for things to get easier. It can also be taken more basically to be about life as one big routine, having the same old same old but with momentary phases of good and bad change between the regular day to day. Maybe your take of it is neither of these, but the beauty of art is that there is no set right or wrong; it’s transferable to whoever finds it. The music video is a little disturbing, with the band members appearing fake because they are. The casts of themselves sing the song in chairs at church, and by the end, the hyper-realistic dolls or robots spark, smoke, and explode. Stereogum said that Grizzly Bear had the best shows of 2007, and we look back on the years we partnered with them dotingly.